I was helped from a distance

I spent my 40th birthday alone in hospital. Not exactly the celebration I had expected!

I was lethargic, exhausted, out of breath. I just wasn’t myself.

I’m a mum of two young boys with lots of hobbies, an active member of my congregation and a youth leader. I was never at home and I loved being busy. So in September 2019, when I started feeling like this, I knew something was wrong.

After a meeting at work I realized I had been holding my breath as I was having what felt like muscular pain in the middle of my back. It felt like I needed a massage so I called some friends to see where the best place for a massage was, thinking it would help! When this (surprisingly) didn’t help, I went to A & E and was told I was having a muscular issue and I had to exercise my trapezius muscle. The next day, I visited my GP who thought it was pleurisy, a bit like pneumonia but they couldn’t see any liquid on my lungs.

A month later, I was still having problems breathing and the pain was still there. After another visit to the doctor they said it was probably anxiety. To ease the constant pain, I started taking pain killers every day. I was learning to live with the pain but I wasn’t really living. I was just getting up, doing the basic and minimum to survive and going straight to bed. I was socialising less and was falling asleep even when I was out at events! While everyone was drinking champagne, I was sitting somewhere fast asleep.

Then 2020 started and a friend suggested having my thyroid checked for lethargy, so off I went to the GP again. My blood test came back clear but I just knew something was wrong, even if the doctors couldn’t find anything.

I started chalking these feelings up to soon becoming 40. “Maybe this is just what 40 feels like!” So I changed my lifestyle; gave up alcohol, went on a diet, started power walking to try and boost my energy, lost weight. Nothing worked.

18th February 2020 was the day everything changed. I went to work as usual and at midday started having a heavy coughing fit. You know the type, where the harder you cough the harder it is to clear. To my horror, I was coughing up blood.

I rushed to A&E and had blood tests, CT scans, X-rays, everything. The doctor told me he wasn’t happy and to come back in the morning for the results. 8am the next morning I was on my own and scared.

I had to interrupt and ask if this was cancer. The “yes” that came back took my breath away.

I was referred to get more tests done and after a lung biopsy I had to wait 3-4 long days for the results.

When they called me in again, the doctors told me I had a rare cancer called Sarcoma and that I shouldn’t Google it because it was very scary. You can get it anywhere but I happened to get it on my right lung. The pain I had been feeling was the tumour pushing on a nerve in my back. The doctor was 99% sure that the lung would have to be removed. He reassured me that lots of people have a lung removed and are OK and that there was a glimmer of hope, as the tumour was just in the right lung. It wasn’t exactly great news, I still had to have a major organ removed!

I couldn’t fault the speed at which I was tested, my results came in and I was sent to surgery. I remember joking that it must have been because I’m worth it! Less than a month after I went to A & E I had another horrible day. Something no mother should ever have to tell their children. My boys visited me in hospital, they were amazing, so mature and my husband and I promised we would be honest with them so they didn’t have to worry. I managed to hold it together until it was time for them to leave. Thank God my mum was there to hold me up.

Interesting fact, only 100 people a year are diagnosed with this type of sarcoma and the reason I got it? Just bad luck.

The plan was to have chemotherapy first to shrink the tumour and then have surgery to remove my lung, followed by radiotherapy. For three days every three weeks I would need to stay in hospital for my chemo treatment. I would lose my hair, eyebrows and eyelashes, along with the usual chemo effects. All of this in the midst of Covid-19, so I spent my 40th birthday alone in Barnet Hospital. Not exactly the celebration I had expected!

I finally finished my chemo and in August arrived at hospital to have two thirds of my right lung removed. Seven days after surgery I wasn’t recovering well and I had fluid in the wrong places. They would need to do the surgery again and remove the whole lung. In the hospital, not being able to see anyone for a whole month, as well as a second surgery, was very traumatic.

When I returned home I was weak and vulnerable. Walking was difficult, stairs were impossible.

My Nan had suffered from cancer and The Nightingale had helped her with complementary therapies so when I returned home, my mum suggested I go to them for support. I originally contacted them for the children as I just wanted to protect them, I wasn’t thinking about me. I didn’t know what to expect from The Nightingale, mainly because I didn’t know what I wanted or needed from them. Even though the centre was closed due to lockdown, I was surprised that they could still provide me with support.

When I came out of hospital I was really emotional and thought I was dying. The Nightingale identified my feelings and suggested that I had one-to-one counselling and attend a Mindfulness course. Until I was allocated a counsellor they still called each week to ensure I was coping. They gave me hope I didn’t have. 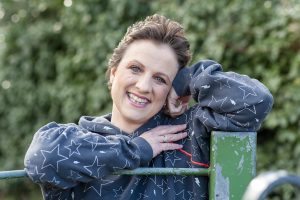 I would say that the Mindfulness course has been life changing. What I’ve learnt is to live with this new  norm, it’s part of who I am now and what’s important is how I choose to deal with it. I want to live in the  now. It’s also the first time I’ve ever had counselling like this so I was unsure whether it would actually  help me or not. It really did. I can’t believe how far I have come from the start to now. I looked forward  to each session and now feel better equipped to continue with my life.

Going through cancer during Covid-19 has been tough. Dealing with appointments and surgery on my  own and not seeing my boys and husband was so hard. The worst pain was in my heart from being away  from my family. Now I’m at home recovering I’ve spent more time with my family than I ever would  have. I’ve not had to feel guilty about my boys missing out on rugby or swimming because of mum being ill as no one is doing these things. We’ve all been in this house together, spending an incredible amount of time together. I’m probably one of the only mums that’s sad the kids have gone back to school!

I am so grateful to The Nightingale for all their support. I had the perception that they only helped older people, like my Nan. I think it’s important for people to know that they have so much to offer to everyone going through cancer. As soon as I first talked to them, it was the “can do” attitude, even in a time where not a lot could happen, that gave me real hope.

I’m quite a sociable person and so I am looking forward to when The Nightingale is fully open so that I can meet people face to face. If their remote services are anything to go by, I know when I finally get to visit the centre, they will all help me enormously.

If you or someone you know has been affected by cancer, see how we could help you today.