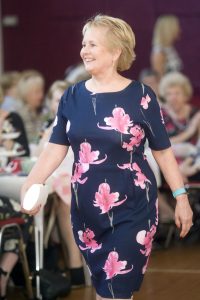 My story started in March 2007 when I visited the doctor just to check out my blood pressure.

I had recently started going to the gym and as part of the induction, I had to undergo a health check. My blood pressure was unusually high so off I trotted to the GP surgery.

It was while I was there that I happened to mention a funny kind of hard tissue on one of my breasts, quite near the armpit. He said since I’d just started working out, it was probably muscular but I didn’t have one on the other side so he sent me to the hospital for a check-up anyway.

At the hospital two weeks later I was told it was probably nothing to worry about but they would do a biopsy anyway, just in case.

I thought nothing of it as cancer isn’t in my family and I hadn’t felt unwell in the slightest.

So, a week later, as my sister and I were sitting in the waiting room for the results, I remember us laughing and joking like we always do when we’re together.

Little did I know that my world was about to come crashing down.

Within a month of this appointment I was in Barnet Hospital having a lumpectomy: surgery in which the tumour and surrounding tissue is removed from the breast.

In July I started having chemotherapy and quite quickly developed septicemia which put me in an isolation ward in the North Middlesex Hospital.

I had never felt so low: my hair had started to fall out; visitors were limited due to the nature of my incarceration. I felt lonely and desperate: I didn’t want to go on.

But life is a funny thing and just when I was about to give up all hope, a good friend visited who made me think twice about things. For starters, he said it was no big deal that I had lost my hair as it would grow back! I can’t understate the importance of having a good friend who is there when the chips are down – someone who knows how to lift your spirits.

This was just as well because a couple of months later I got another infection which gave me the symptoms of a heart attack and I was shipped back off to hospital for another week!

By the end of November I started having radiotherapy. It wasn’t plain sailing: I got second-degree burns which felt like having all my nerve endings loose. I couldn’t wear a bra and there’s a fine line between letting the burnt area air out enough to put a dressing on it and airing it out too much and risking it getting infected.

Unsurprisingly, I developed depression: I didn’t want to text anyone, speak to anyone and didn’t want anyone near me. I used to take myself off to the pictures because no one knows you there and you can lose yourself in the story; you don’t have to think about what you’re going through.

But it’s not all bad! After my lumpectomy I had discovered The Nightingale and they became a big part of my recovery. I remembered a friend of mine who’d had breast cancer a few years back, raving about them so when I was given leaflets by the breast cancer nurses it jogged my memory about them so I thought, “What have I got to lose?”

I remember phoning in and speaking to the lovely Eileen. She picked me up and took me straight round to a drop in session. I absolutely loved it: I was able to speak to people who were going through the same things; feeling the same emotions.

I was lucky at that time that The Nightingale was quite a young charity so I never had to wait for counselling.

Things have changed though and now they are 15 years old and the need for their services is greater than ever. I am so pleased they have been able to find their own building.

Waiting lists should become shorter and the range of therapies and events will increase magnificently. Working conditions will be so much better and it will be so much more user friendly for clients. I certainly wish the new place had been around when I’d been on my journey.

The new building is a fabulous opportunity to expand and grow and reach out to more people, to both clients and volunteers.

But they still need funding to continue their fantastic work.

I have been volunteering for The Nightingale since I retired in 2013. I helped set up and run the shop in Waltham Cross; I did the Ruby Ball at Hatfield House; I have been a befriender and helped in the fundraising office, amongst many, many other things!

I may not be quite so hands on any more but I know how important each penny is to them. I still run my Champney’s evenings to help fundraise a little and will help out where I can.

It’s important for all of us to do what we can. The big events are important but so are the little ones: maybe you could run a coffee morning or a bridge evening? The new phase of The Nightingale’s journey is going to need all the help we can muster, so let’s make it a fantastic journey!